It’s that time, we have our exclusive LR Oath of the Gatewatch preview cards! This time around we have a sweet suite of five gold, enemy, uncommons. Let’s get right into it here with some inintial impressions, but you can get our full take on Episode 318 of LR. 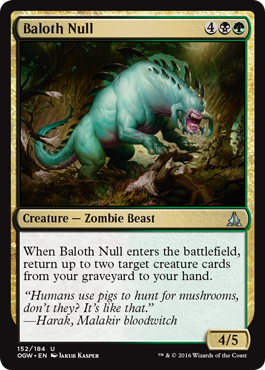 They tried to sell us on Dutiful Return, but it turns out sticking this ability on a sizable 4/5 beast is a better way to go. It’s about as grindy as they get at 6 mana for a clunky 3 cards worth of value. The BG sacrifice deck never really came together in BFZ Draft, but this guy would fit right in if it’s better this time around.

Next is Cliffhaven Vampire:

I keep expecting this to have lifelink, but even without it, it’s pretty strong. A 2/4 flyer for four mana that’s also an ally is decent, and it turns all of your (repeatable) life gain engines into damage clocks. I like the 4 toughness especially as I expect you’ll want to grind the game to a halt once Cliffhaven Vampire shows up.

Stormchaser Mage is cheap, aggressive, evasive, and can get pretty big too in the right deck. It’s weird seeing prowess here, but the card looks strong. Either way, a 1/3 flyer for 2 mana that sometimes gets bigger is a fine deal in Limited. I wonder if this is good enough for Constructed?

Next is Void Grafter:

I love cards like this. These guys always perform well in Limited, but not in a dominating way. More subtle than that really. A 2/4 for three mana is already a good deal, and flash means it can be a surprise blocker that can actually survive and generate value by double blocking too. Within the heaps of gravy lies yet another upside with the whole gift of hexproof thing. That won’t be relevant super often, but when it is, it’s *nice*. Love this one. 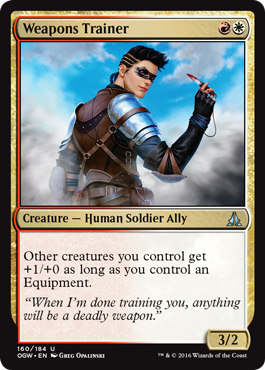 First thing is that this is a 3/2 for two mana which is nice and aggressive. Also an ally for when that matters. The equipment thing is kind of cool, but we had better see some improved equipment in this set since the equipment in BFZ is lackluster. Of note, it doesn’t seem to stack; it’s just IF you control an equipment, THEN your other creatures get the bonus. If WR is good, and if you can go wide, and if you have playable equipment, this card will do just fine.

7 thoughts on “Exclusive Oath of the Gatewatch Preview Cards”