I noticed some people making Top 8 lists of their favorite cards of all time. Sometimes I find this kind of meme a little annoying, but this one seems fun so I’m going for it.

Ajani Vengeant is my favorite planeswalker. It’s also the first planeswalker I opened in a booster pack—and it was a foil! I love how flexible the card is, taking out pesky aggressive creatures or locking down problematic permanents.

Ye Olde Slimeball. Acidic Slime is one of those special cards that never quite feels broken but always matters. I love that it can take out key artifacts or enchantments, but also kills lands when there aren’t better targets around. And then it blocks.

I have a playset of Beta Lightning Bolts. I won’t ever sell them. I’m a Spike, and I appreciate good old efficiency in my Magic cards. Lightning Bolt is one of the most efficient cards ever printed. But it’s also iconic because it’s so easy to understand and because it basically defines red as a color.

Chronomaton is so unassuming. I remember not being super impressed by it when I first saw it. It didn’t take long for me to fall in love with this little robot, as it made such an impact on M13 draft. M13 is one of my favorite draft formats ever, and this was my favorite card from that format.

Early in my draft career, I was a little shy about brewing decks. I would draft primarily solid decks that I felt had the best percent chance of winning. Vent Sentinel changed that for me. After drafting Rise of the Eldrazi a LOT, I started to push some boundaries and the first I tried was this deck based around all defenders and Vent Sentinel. I had a lot of success drafting that strategy and was proud to have discovered it on my own. Thanks Vent Sentinel!

The Gravy Train. I played this card in Standard a lot while it was legal in everything from ramp decks using Genesis Wave to Blue/Black control decks. Grave Titan embodies raw power. The impact it has on the board is so profound once resolved. It’s good against most strategies as it clogs up the ground against creature decks and closes out all other games in a real hurry. Now I get to draft him in Cube most often, but I’m just happy to keep in touch with this old friend. 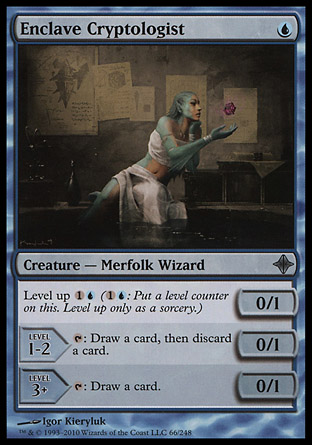 I love a looter, and Enclave Cryptologist is my favorite one. I love how low cost it is to get on the battlefield and get to looting. After the dust settles, if your opponent hasn’t dedicated a removal spell to it, it just takes over the game. My favorite part about the card is that second when you put the 3rd level counter on the stack and then wait to see if your opponent has the removal spell for it or not. Such a good sweat.

Man-o’-War is so easily my favorite card of all time, I think I populated the rest of this list just to put it at #1. This card embodies basically everything I love about Magic and how I like to play it. I love both versions of the artwork for this card as well, though I prefer the Una Fricker version posted above.

I also love that Man-o’-War isn’t completely broken. It would be easy to put some busted card like Ancestral Recall or Jace, the Mindsculptor here but that’s just not my style.