Favorable Winds is a sweet little build-around that turns a potent flying clock into a one-turn-faster potent flying clock most of the time. You have to get a lot of flyers to make this work, but it pays you back for the two mana and a card in full when it’s good. Flying tokens also make this better so we’ll keep an eye out for those.

Storm Fleet Aerialist is a sweet little flying Pirate that heavily rewards you for playing aggressive one-drops but also just is mana efficient in the middle part of the game either way. The truth is that you’d usually pay 2U for a 2/3 with flying and this will often be that card but cheaper, even on turn three. I love it. 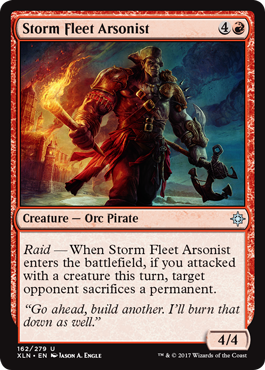 Storm Fleet Arsonist lives in a hotly contested slot: the dreaded five-mana slot. The competition here is usually quite strong, and on top of that most decks usually only want a few cards of this casting cost in them. Still, if you are being aggressive and attacking a lot, this is the kind of card that can just set the opponent back enough for you to get the job done. They can sacrifice lands to this which makes it a little worse, but if you attack on turn five, then play this, you are getting *something* relevant most of the time.