What is Canadian Highlander?

Canadian Highlander is a Constructed format. The minimum deck size is 100 cards and it’s a singleton format which means you can only use one copy of each card (with the exception of basic lands). It’s played like any other form of Constructed Magic: One-on-one, starting at 20 life.

It uses the current Vintage banned list. As you may know, Vintage doesn’t have cards banned for power level reasons, but rather for other reasons like requiring physical dexterity or ante cards. Since Highlander is a singleton format, you can play any card legal in Vintage in your deck. Yes, this includes any Mox, Black Lotus, Library of Alexandria, Demonic Tutor, whatever.

Now, you may be checking out at this point as acquiring these cards is hard to do. Fear not, there are a few stopgaps which make this much less of an issue:

First, you are allowed to use cards from Collector’s Edition, International Edition, and Championship Deck Edition in your decks. You still can’t use silver-bordered cards or conspiracies however.

Second, the format uses a clever way to restrict the number of broken cards you can play: The points system. More on that later.

Oh, and there are no sideboards in Highlander.

When Commander came to prominence, it filled a very important niche in Magic; it let you play with old, nostalgic, fun cards. Cards like Doubling Season, various big scary dragons, and Warp World simply didn’t have a home before Commander.

Commander is meant to be played casually, and played with multiple players. Starting at 40 life also means that the efficient spells we often play in Constructed are replaced by bigger, more expensive effects.

Commander is awesome, and has done a great job of filling a niche that needed to be filled for a long time. I have an Animar Commander deck and I love it.

If you are anything like me, Commander isn’t *exactly* what I want. While I appreciate the long games and big swingy turns in Commander, it’s the sweet, efficient, cards of yore that I miss. It’s tight play and sweet sequences.

I miss Preordain, and Mulldrifter and Deathrite Shaman and Vendilion Clique. And Lightning Bolt and Jace the god damned Mind Sculptor.

But many cards that fit this description are either just bad in Commander — where you are facing down multiple opponents — or they are frowned upon because Commander is meant to be played casually. You know, just for fun.

This introduces a lot of questions and concerns. How each person defines casual doesn’t usually match the way another person does. For me, I like to have a clear intent in mind when I sit down to play Magic.

Win the draft. Kill my opponent. That kind of thing.

And I know I’m not alone in that. I think everyone can see that Commander is fantastic at what it does, but what if what it does isn’t quite what you want to be doing?

This is where Highlander comes in.

In Highlander, you play one-on-one only. You play at 20 life like normal, and you are whole-heartedly encouraged to kill your opponent at the earliest possible convenience.

Now all of those Coiling Oracles, Mystic Snakes, Hypnotic Specters, Counterspells, Think Twices, and yes, Man-O’-Wars can come out of hiding and see some actual play again. And since the format uses the Vintage Banned list, you get to play with the occasional Mox, Mana Drain, Sol Ring, or even a Black Lotus.

The points system is a fantastic way to regulate the power level of decks in a singleton format. Since very few cards are outright banned, Highlander is ripe for the picking to be a completely degenerate format. There are so many tutors and broken fast mana spells available that the decks would feel all quite similar, and quickly.

The points system addresses a subset of very powerful cards, each of which receives a number of points associated to it.

The way it works is simple: You have 7 points to spend however you like. You can play fewer than 7 if you want, but you can’t play more than 7 points in a 100 card Highlander deck.

For example, if you wanted to run Ancestral Recall in your deck, that will cost you 3 of your 7 points. A mox you say? Those are 2 points. With your remaining two points you could run a Strip Mine. 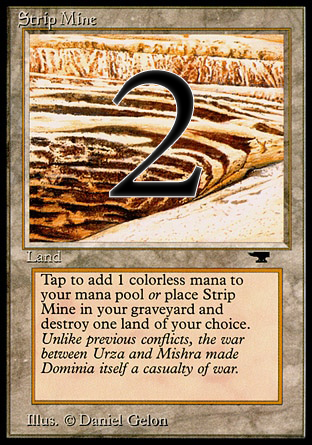 Or maybe a Vampiric Tutor. Or you could run both Umezawa’s Jitte and Balance. It’s up to you.

Pointing tutors makes a ton of sense, as the whole point of a 100 card format is to introduce varied game play. Doing this also keeps absurd combos at bay, while still letting combo exist.

Pointing fast mana makes sense since everyone would just always play as much of it as they could if there were no restriction. This opens the door for different types of decks to emerge.

And some cards are just too good. Many of these are the cards that are restricted even in Vintage. Ancestral Recall, Balance, Doomsday.

I’ll admit I was a little daunted by the points list at first, but after you get into your first deckbuild, you realize what an awesome way this is to restrict card play. It does put a lot of pressure on the points assigned to be close to correct, but the tension it creates is totally worth it.

What I really wanted was a deck that I could take with me to coverage events, and be able to jam some fun games of interesting Magic in the hotel lobby, at the airport gate, or with friends after dinner. I didn’t want to commit to a long Commander game, and I wanted to be able to play the cards I like to play.

I love the idea of having an ever-evolving Highlander deck, and when awesome new cards come out for it, I’ll add them in.

So go get started on your Highlander deck. If you’re like me, you’ll enjoy it!

I wanted to say thanks to the awesome Magic players in the Victoria, BC area who developed this format, and even took the time to introduce it to me. They made the Highlander website referenced in this article and also manage the points list.