We have not one but three exclusive preview cards to share with you from Magic: Origins! Renown is the word of the day, and as you’ll see it’s a pretty straightforward and cool combat-based mechanic.

Let’s look at the first of the three, as it gives us a good feel for what Renown is:

Topan Freeblade is a pretty straightforward common. It’s a 2/2 with Vigilance for 1W, but it has renown 1. The 1 part corresponds to the number of +1/+1 counters you get if the creature deals combat damage to a player. Some cards care about if and when your creatures become renowned. This one just gets you the +1/+1 counter to make a nice attacker/blocker.

We have two uncommons as well, and we’ll start with Valeron Wardens. First thing to note is that this one has renown 2, so it will get two +1/+1 counters if it manages to deal combat damage to a player. But these Wardens can also serve as a card drawing engine if you have enough renowned creatures. And don’t forget it counts itself! 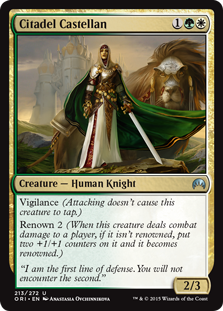 Last on the list is another uncommon, but this one is gold. Cidadel Castellan is like the big sister of the Topan Freeblade. It’s a three-drop, adding green to the casting cost, but also has vigilance and renown. This one has renown 2 though, which should make a big difference if you can actually get through. A 4/5 vigilance that early in the game is a force to be reckoned with!

I’m curious to see how much better combat tricks get with these renown creatures. Removal will stay good as always of course.

Luis and I will talk about these cards on episode 290 of LR as well, we’ll see you there!